Press enter to begin your search

Our investment research revolves around two traditional schools of study.

The most recognizable to most investors is fundamental analysis. In this area, we are looking at the numbers. We’re analyzing economic data on the macro side and earnings/profitability numbers on our specific companies.

Our second school of study is technical analysis. In this area, we are studying the historical price movements of the markets and the individual issues that comprise them. Further, in this area, we study market sentiment and what the internals of the market are telling us.

Fundamental Analysis is the method of evaluating securities by attempting to measure the intrinsic value of a particular stock. It’s the study of everything from the overall economy and industry conditions, to the financial condition and management of specific companies (i.e. using real data to evaluate a stock’s value). The method utilizes items such as revenues, earnings, return on equity and profit margins to determine a company’s underlying value and potential for future growth. In essence, you can think of fundamental analysis as “kicking the tires” for the companies we would potentially invest in.

One of the major assumptions under fundamental analysis is that, even though things get mispriced in the market from time to time, the price of an asset will eventually gravitate toward its true value. This seems to be a reasonable bet considering the long upward march of quality stocks in general despite regular setbacks and periods of irrational exuberance. The key strategy for the fundamentalist is to buy when prices are at or below this intrinsic value and sell when they get overpriced

Quality starts at the top. We look for management with long-term goals and direction as well as a means with which to accomplish their goals. Management should promote a defined business objective and a strategy that implement well. As well, it is imperative that management applies high standards of corporate governance and views its shareholders as co-owners of the business. Make no mistake about it, Wall Street holds a grudge. If corporate management is finagling earnings or operating in "the gray area", we forego investment in that firm. At some point, shady management will catch up to a company, no matter what the earnings potential is. Thus, we are looking for forthright leaders and upstanding teams to lead our team and we will settle for nothing less.
2

Top Down vs. Bottom-Up

Our strategy is to identify industry leaders, or companies vying for a leadership position in a growth industry. To this end, our research can be broken into two schools or disciplines: Top/Down Analysis and Bottom Up Analysis. Our research arm uses both. On one hand, Top/Down Analysis begins with a broad base, macro, view of the world and its' economies. We search for emerging trends and the countries or industries that will benefit from these budding themes. After we've established the areas we want to focus on, we begin to search for quality within the theme. We run proprietary screens that we feel will uncover the companies who will benefit the most from the pending move.
On the other hand, Bottom-Up Analysis starts with the company itself. With this type of analysis, you are beating the bushes and looking for quality issues regardless of sector or global location. For example, we may run screens that give us stocks with > 15% earnings growth and a P/E ratio less than 35. The screen would give us stocks that fit the fundamental condition. With bottom up analysis you are looking for the company first and not the macro picture. However, this type of analysis often leads us "upward" to the discovery of groups that may have additional quality stocks.
3

The economy drives earnings and earnings are what drive the market. We feel that by investing in companies that have above-average prospects for earnings and profitability we will have above average growth in our portfolios. Further, earnings consistency is one of the most overlooked factors in analyzing a company's ability to grow. Most fundamental investors tend to strictly look at a company's growth potential without taking into account the companies track record of delivering on that potential. In our estimation, it's not enough to simply have earnings growth, or, for that matter, earnings consistency. It is imperative that a firm be able to give strong growth and that it be able to consistently hit the target that is set forth for them. It's our belief that earnings consistency in our companies will offer performance consistency in our portfolios.
4

In order to maximize long-term returns, it is essential to pay a reasonable price for a quality company. Investors often disagree on what is a reasonable price. However, it is our belief that moderately overpaying for a stock should not be too damaging to the portfolio over the long-term. If the fundamental estimated earnings base comes to fruition, it is our belief that this will eventually be reflected in the stock price. Our key valuation determinants include a company's long-term growth rate in earning power, the consistency and stability of estimated growth, its profitability, financial condition and projected cash flow. These quantitative and qualitative characteristics should be attractive relative to a peer group of companies and to the general market.

Technical Analysis is the method of evaluating securities by analyzing statistics generated by market activity, such as past prices and volume. On the technical side, we do not necessarily attempt to measure a security’s intrinsic value. From this type of analysis we use charts to identify patterns that can suggest future activity and trends.

There are several ways in which we use technical analysis in our portfolios. From the macro perspective, we use technical analysis to analyze the position of the broad based indices. Take a look at the chart below to see an example of how technical analysis can be used with indices. This is a chart of the S&P 500 from 2000 to 2005. As you can see from the chart, this broad index was in a bear market correction for the better part of 2000-2002. However, in early 2003, the market broke from this downtrend and told us the economy was on the mend. This breakout signaled that the equity markets were transitioning from a bear market to a bull market and were in for a period of out-performance. That said, it was an early clue that we should consider raising our equity exposure. Coincidentally, in late 2002, we were also beginning to see more positive trends from fundamental factors such as GDP growth, consumer confidence and manufacturing. 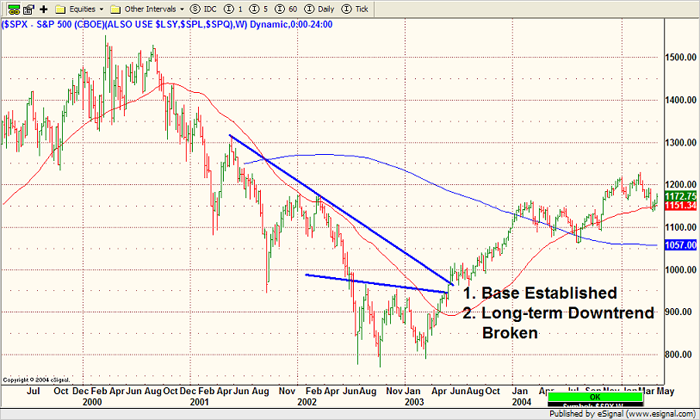 Take a look at the chart below to see an example of how we might use technical analysis to direct us to an entry point for an issue that we’ve already qualified from the fundamental side. The chart below is for Wells Fargo Company (WFC), a super regional bank. From looking at the chart, it is evident that WFC was in a down trend from late 2000 to late 2001. During this time frame, many analysts came out in defense of the stock and we saw a slew of upgrades in 2001 (I’m sure your opinion of analysts and their upgrades is similar to ours). However, even in the face of those upgrades and estimate hikes, the stock continued to fall. Understand, during this time frame, we also believed the stock offered upside. However, the stock continued lower as Institutions and short sellers, in a bad market continued to distribute the issue. In late 2001 something changed. The stock broke thru its descending line of resistance and thus broke out of its yearlong downtrend. This was the time to buy into WFC. The fundamentals were dramatically improving, the trend had changed and institutions were coming in on the buy side. This is where technical analysis will assist us in entering an equity position or sector. 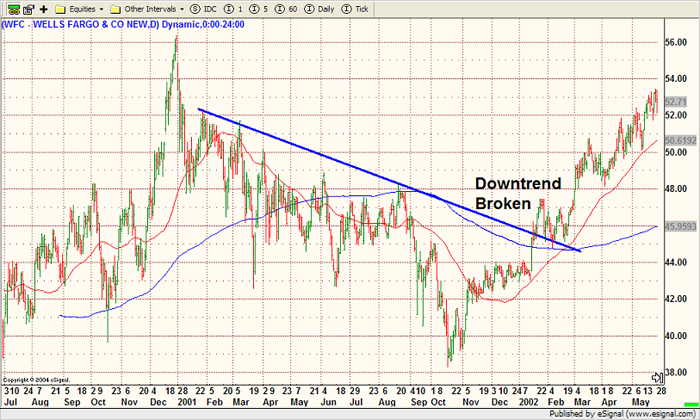 Once again, we stress that we don’t believe fundamental analysis or technical analysis, by themselves, to be an end all. They can and should be used together. Many on Wall Street believe that you should strictly use one school or the other school when doing research. However, we believe both can be used, hand in hand, to give a more effective and disciplined money management approach.